The Little Theatre Gateshead is getting BIGGER!


Following a successful fundraising campaign, for which we won an award - work is ongoing to build a new rehearsal room above the current auditorium, with construction due to be completed in August 2021. A need for this new space was identified following limitations in the rehearsal facilities at the theatre and fundraising has been underway since 2018 to secure the money needed to complete the project.


The Little Theatre, together with the Progressive Players, present ten plays per year to a very supportive and appreciative audience from Gateshead and the surrounding area. Each play requires at least eight weeks' rehearsal time and we have at any one time, two productions in rehearsal. While the most current play is rehearsed on the main stage, the following production is rehearsed in our café/rehearsal room, however this room is small, being half of the size of the main theatre stage. When a production in rehearsal moves on to the main stage, the increased space available means that cast members often need to relearn their positions and moves on stage, as they adapt to a larger acting area. This has a detrimental effect on the cast members' line learning and character development.

Having secured significant funding, we have been able to begin construction of this new rehearsal area. The theatre is temporarily closed to the public due to the Covid pandemic meaning disruption will be minimal.

The new rehearsal space will be acoustically isolated from the auditorium and stage allowing rehearsals to proceed even during a performance with an audience and avoids the need to hire external rehearsal space. We have carefully designed the proposed new rehearsal space so that it is in keeping with the look and feel of the original 1943 theatre, while making it fit for modern and future use. The new space will create a smooth transition from the rehearsal room to the stage and allow more useful time to present better performances for our audiences.

It is anticipated this new space will be a great benefit not only to our audiences’ continued enjoyment of our performances but also to the members of the Progressive Players who give up their free time to present ten plays a year to a very high standard.

We are grateful to have received support from:

The external auditorium wall has been strengthened and raised in preparation to support the steelwork that will support the new rehearsal room floor.

Work is underway to strengthen the spiral staircase that leads to the bar with a new steel core. This will eventually extend to the floor above providing access to the new area.

In the coming weeks the auditorium will be returned to normal. The covering of the aisles has been completed following foundation work.

During May, the steelwork that will support the new rehearsal room area will be installed and concrete will be added using a metal trough, forming the floor. This floor will be thoroughly soundproofed and will have no direct contact with the auditorium ceiling below, eliminating sound transference. 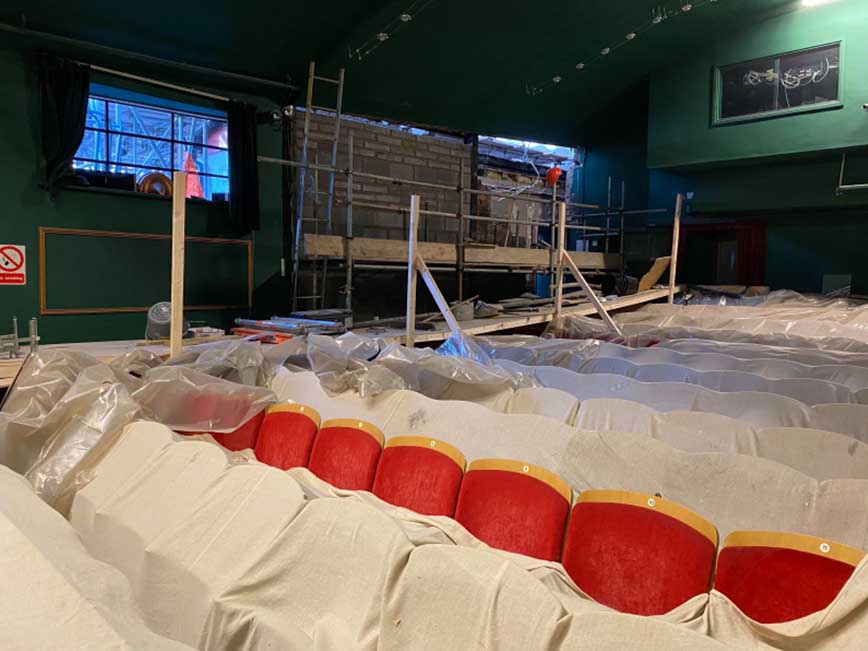 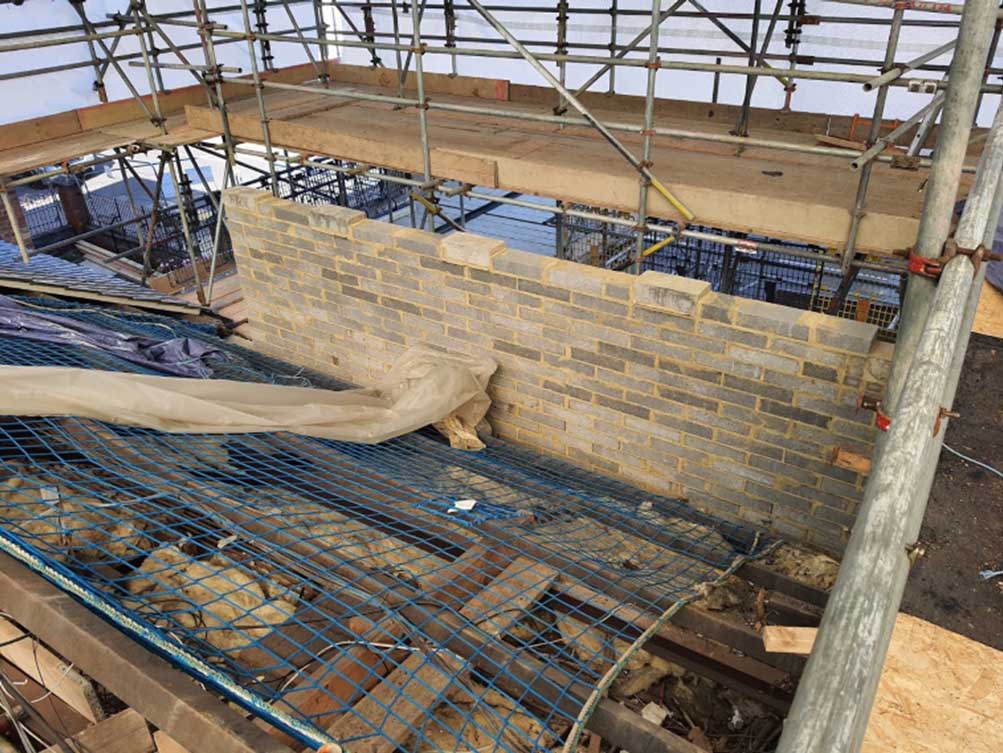 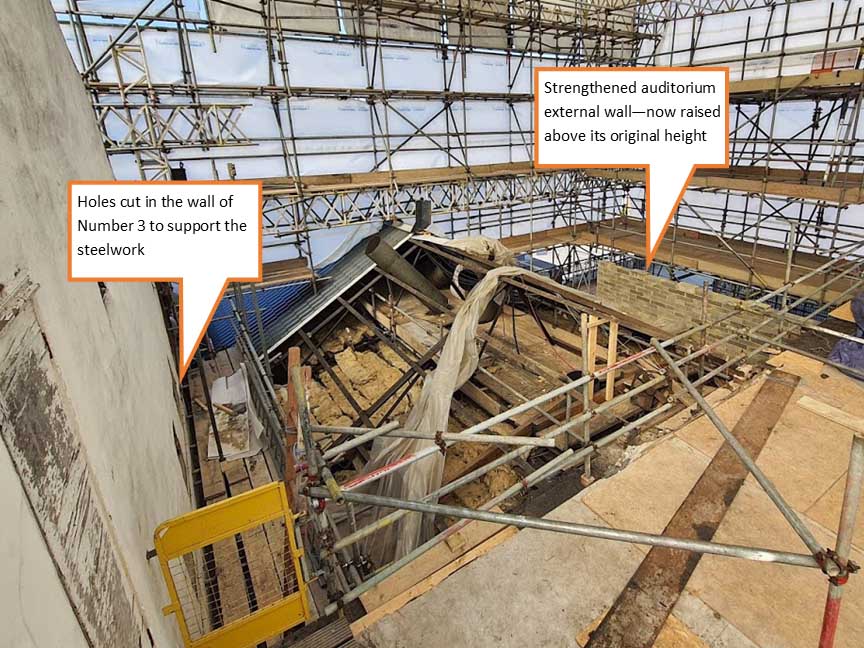 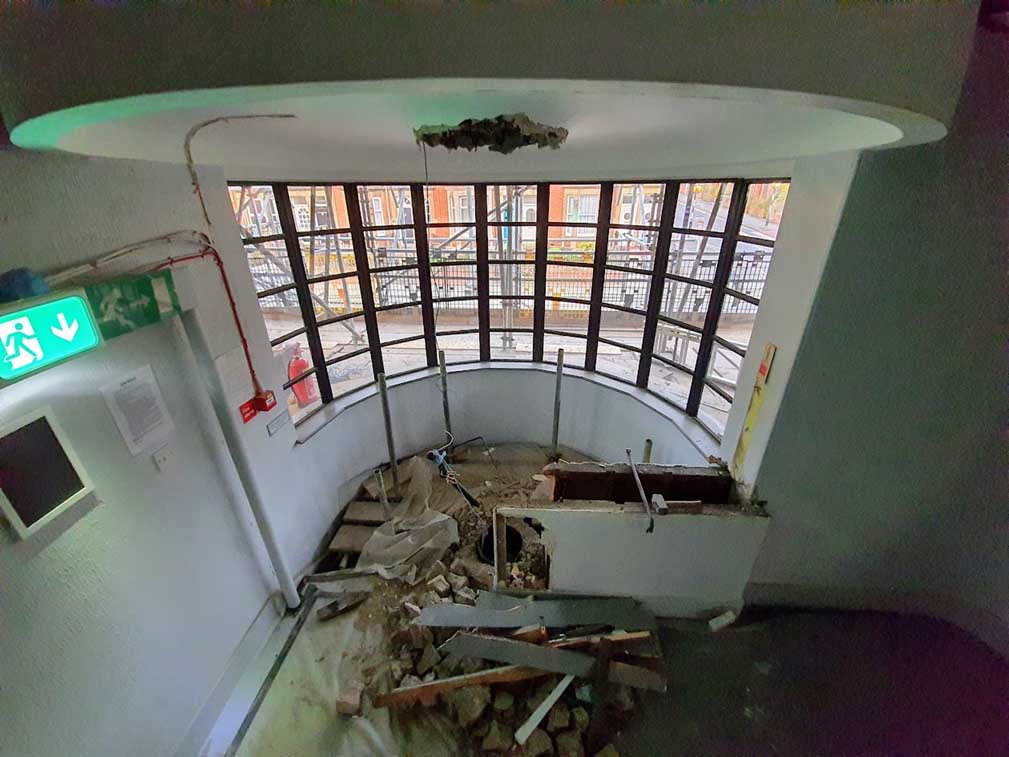 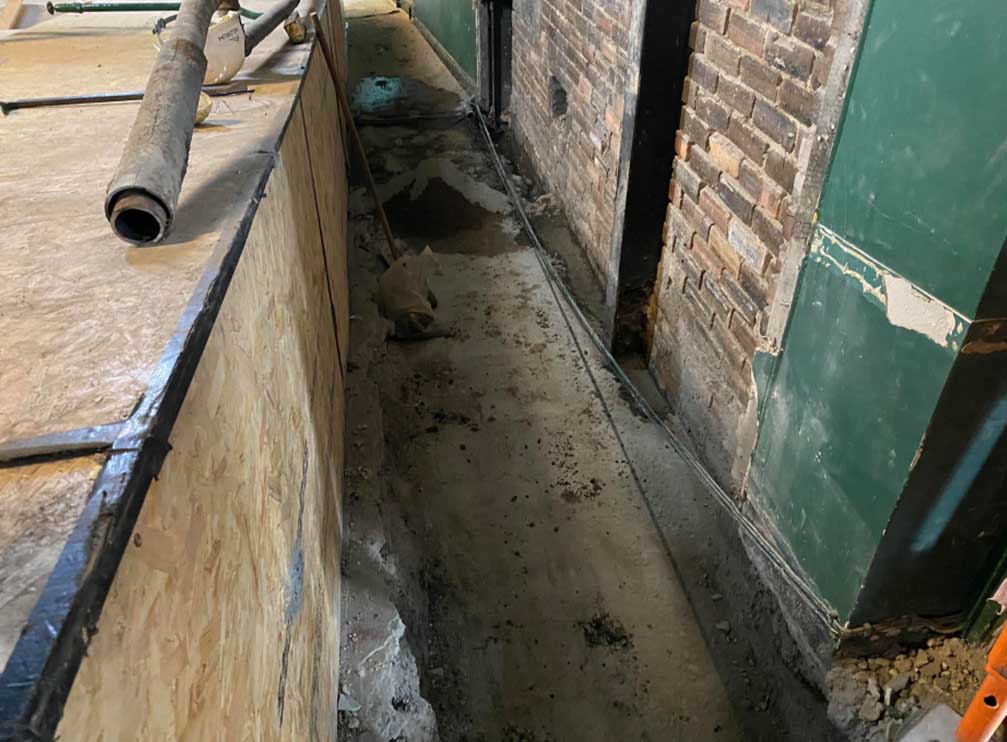 The project has been delayed by approximately 3 weeks due to the unexpected alterations required on the east side wall of the auditorium (Avenue Road) to increase the load bearing capacity. An agreed solution will see deeper foundation excavation trenches created instead of piling in this area, avoiding the risk of disturbing an underground electrical cable in the vicinity. The interior east facing interior auditorium wall was found on exposure to be weaker than expected. This wall will be removed and rebuilt offering greater strength/load bearing capability for the new rehearsal room above. The anticipated completion date is now expected to be early August 2021.

Foundation work on the west side of the auditorium has progressed well and this area will be screeded and re-carpeted soon.

Other works have seen the removal of beams in the bar roof in readiness for installation of stronger steelwork that will support a lobby/entrance area to the auditorium on the floor above. The roof in the landing area of Number 3 Saltwell view is being elevated to increase space where eventually an entrance to the new rehearsal room will be located.

Between 15th and 19th March, a light display was erected to recognise the #lightitinred campaign to raise awareness of the difficulties experienced by theatre and live entertainment venues during the pandemic. 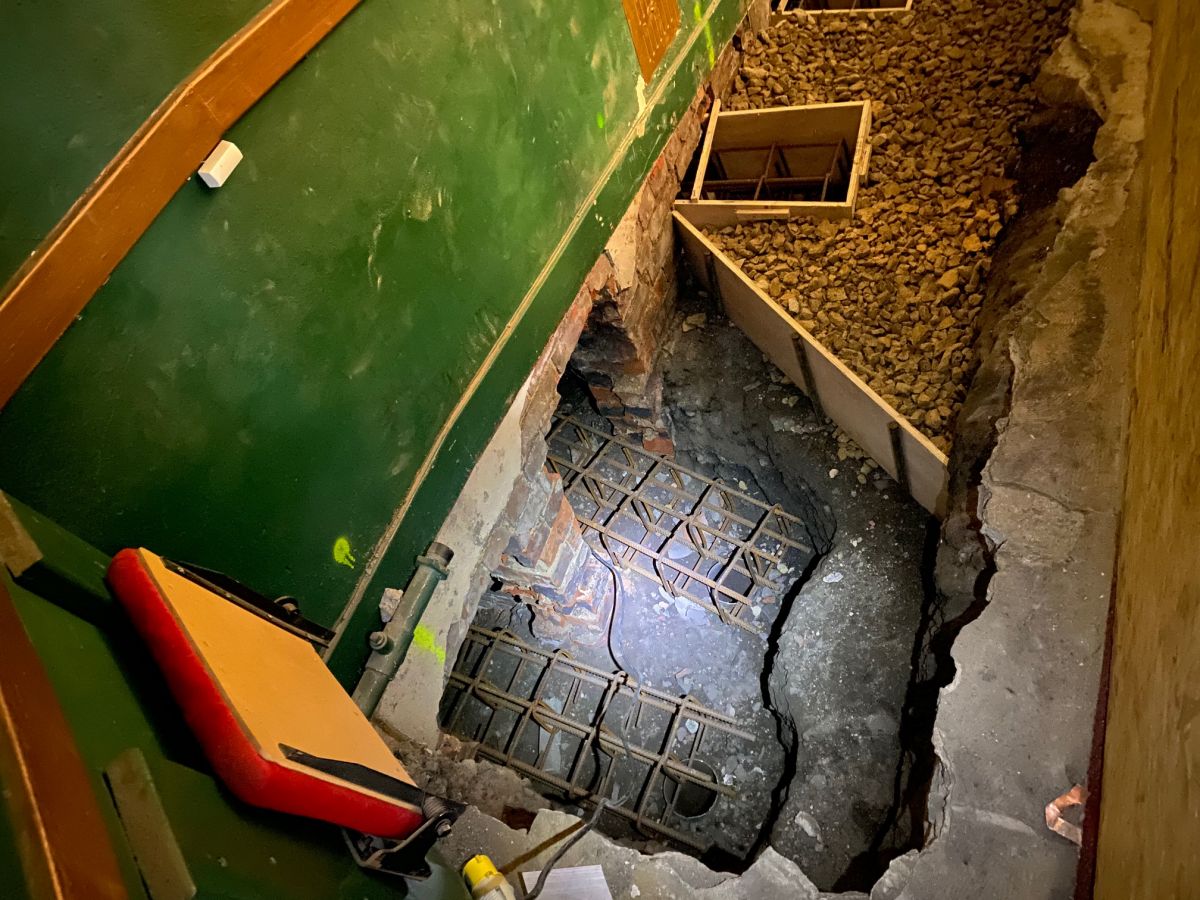 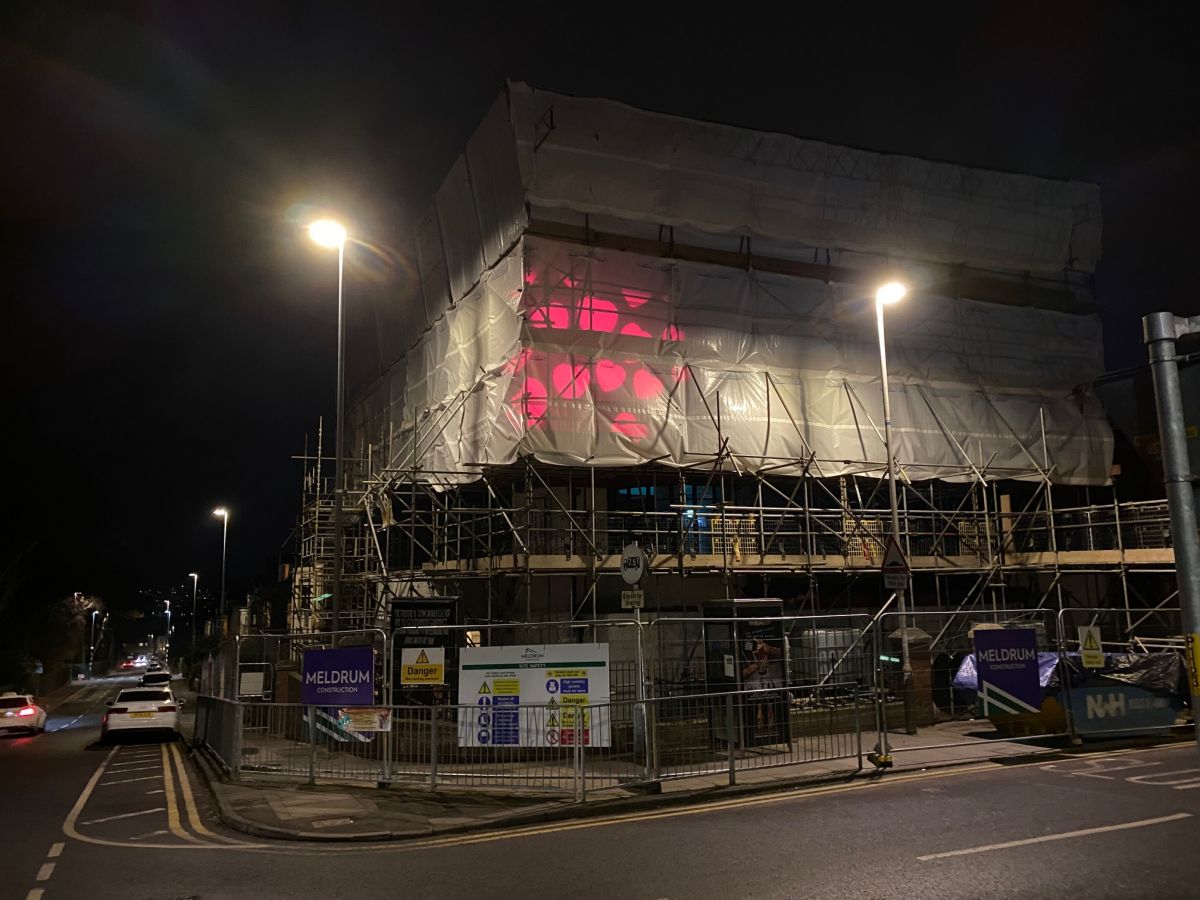 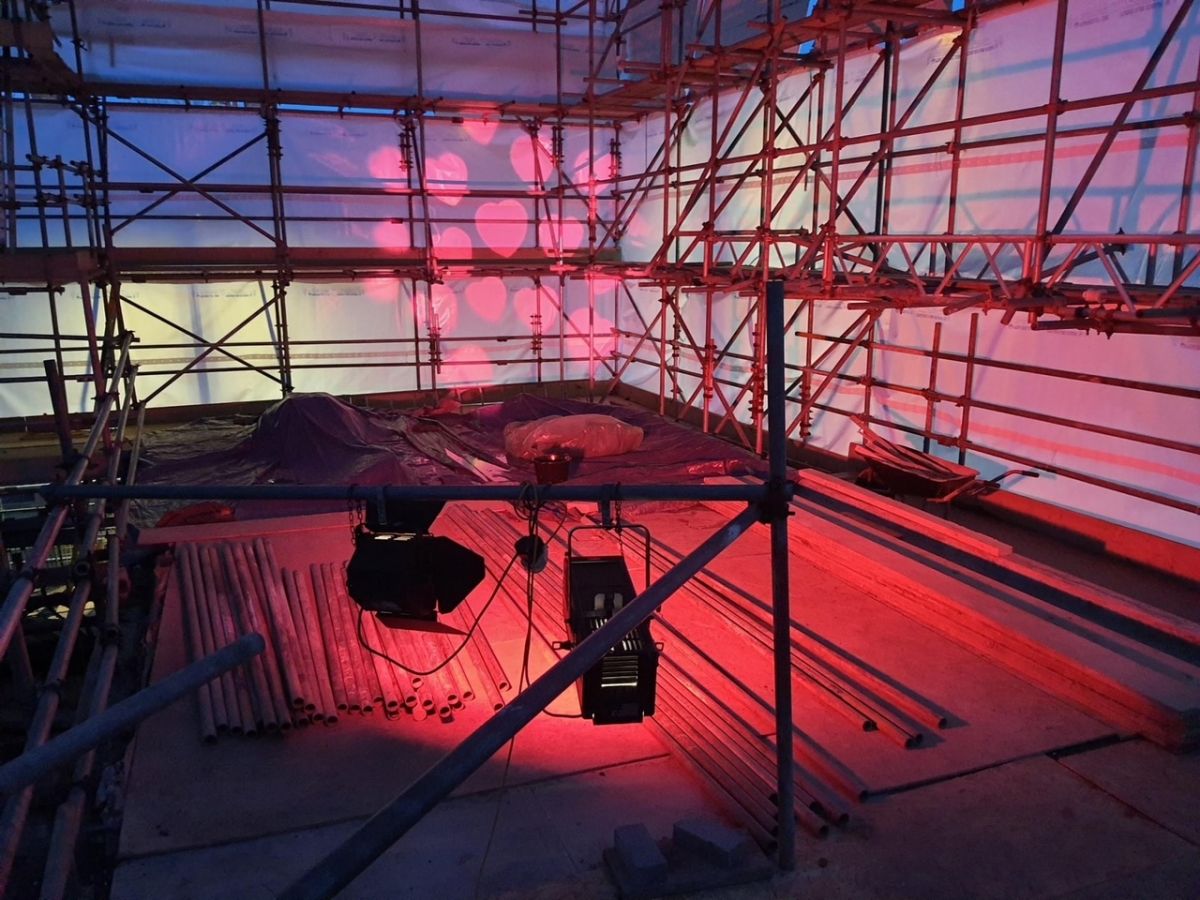 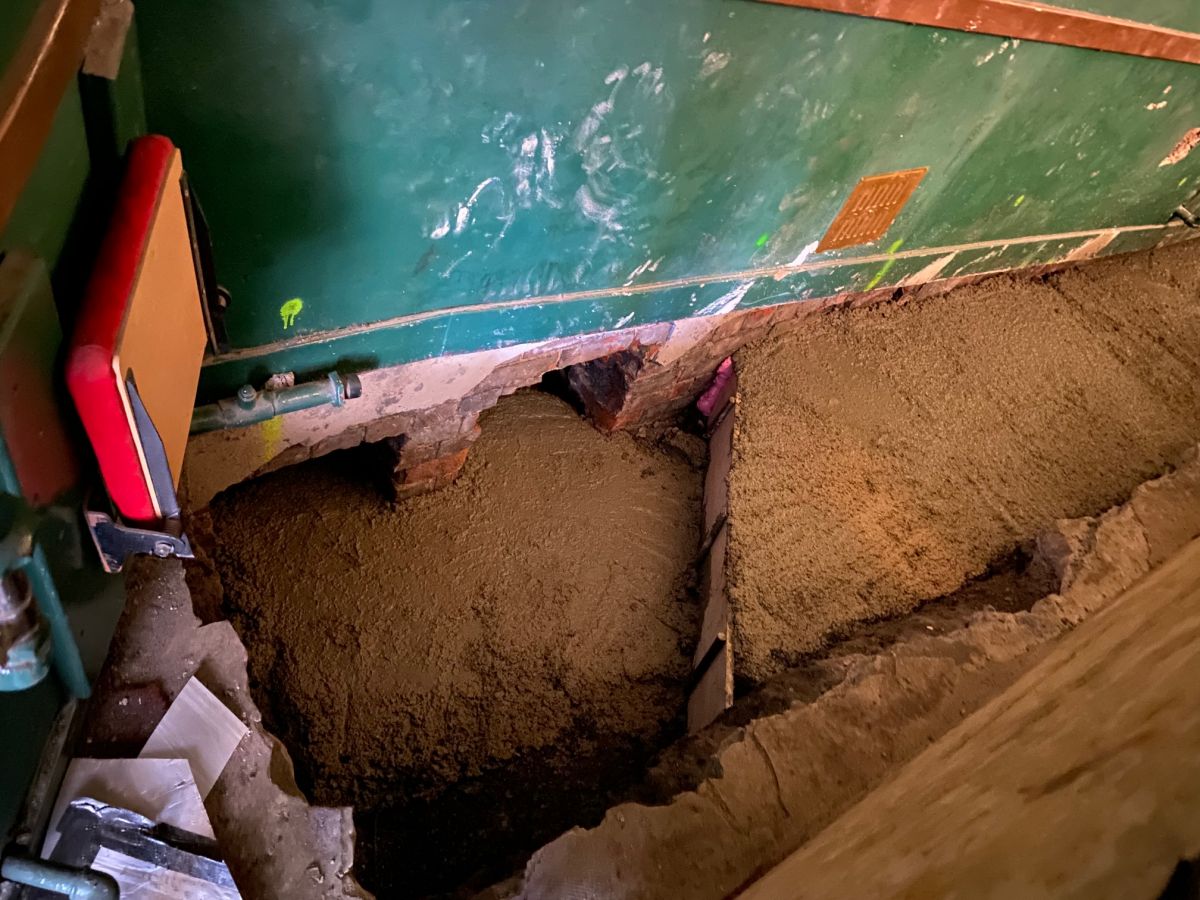 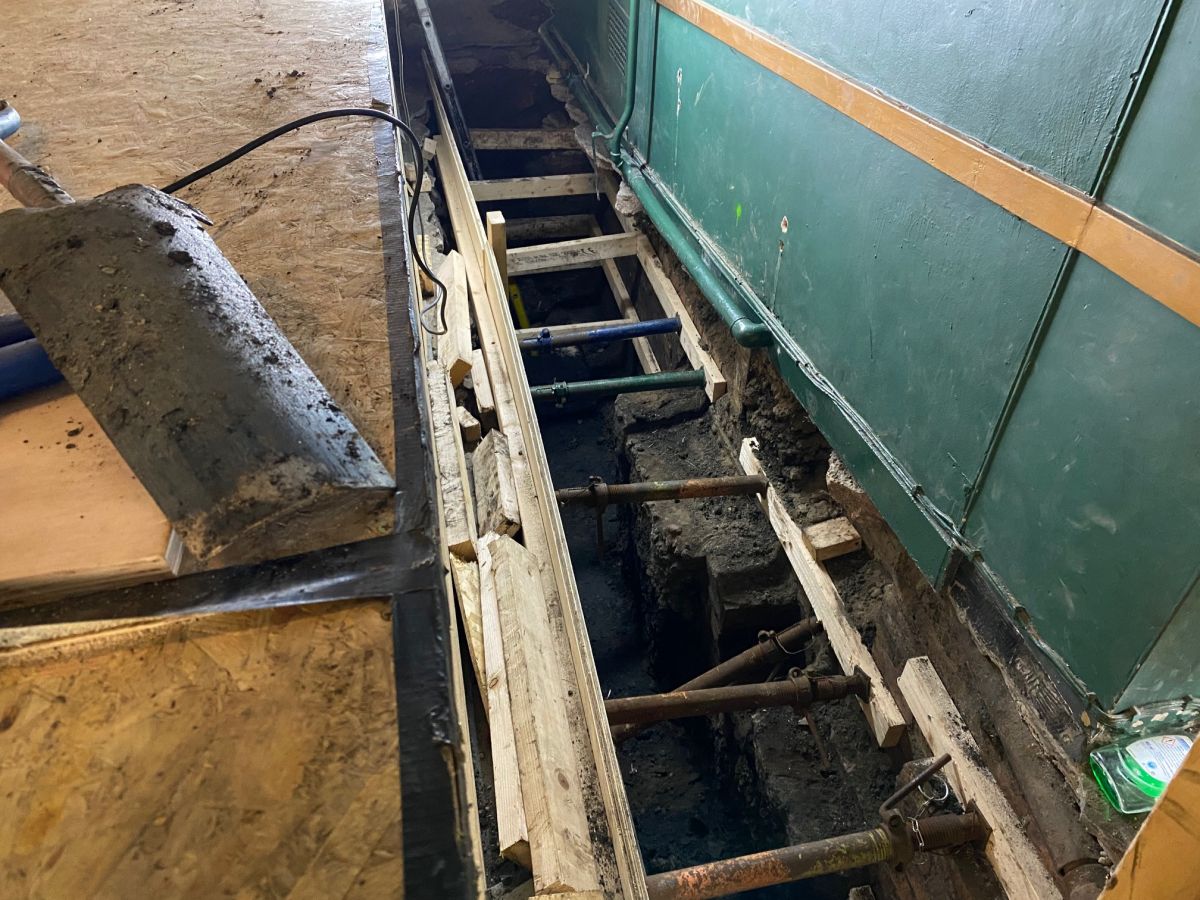 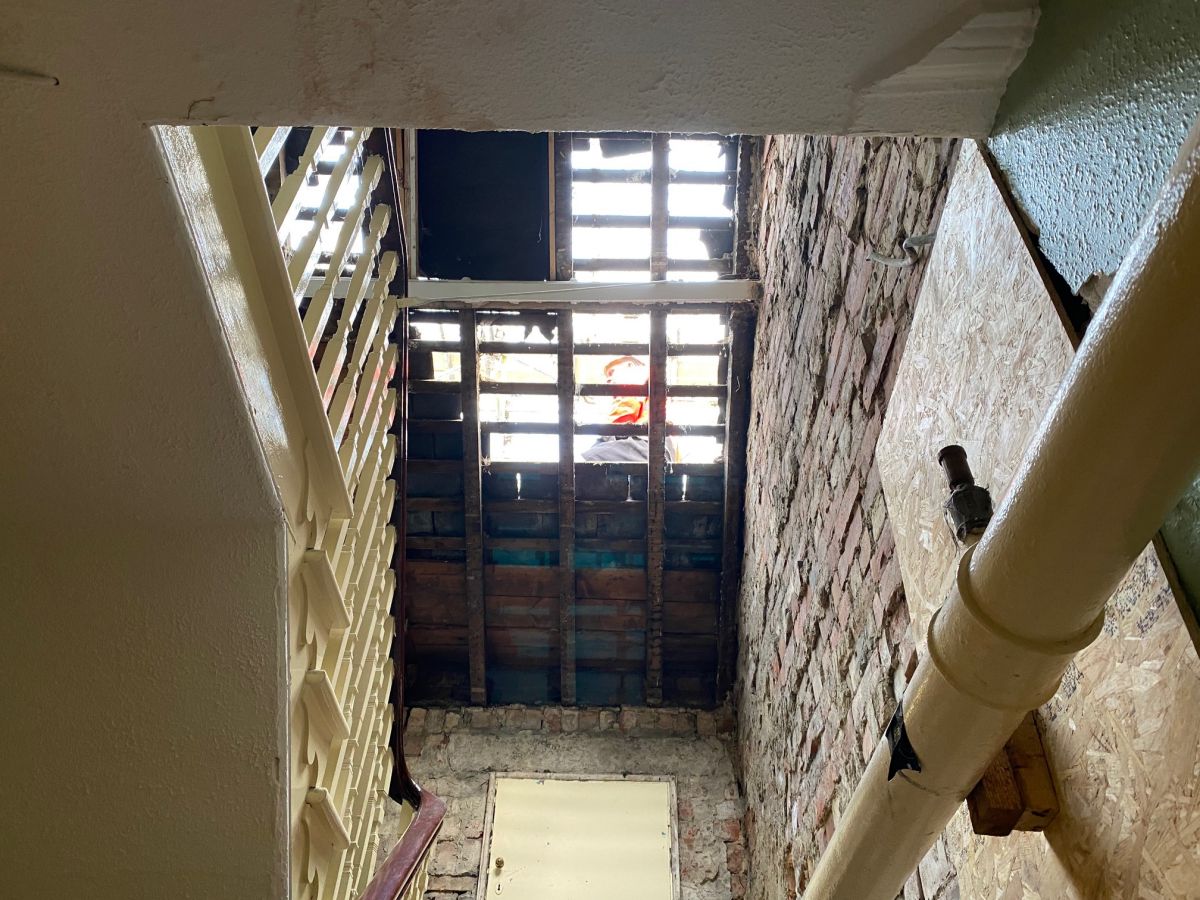 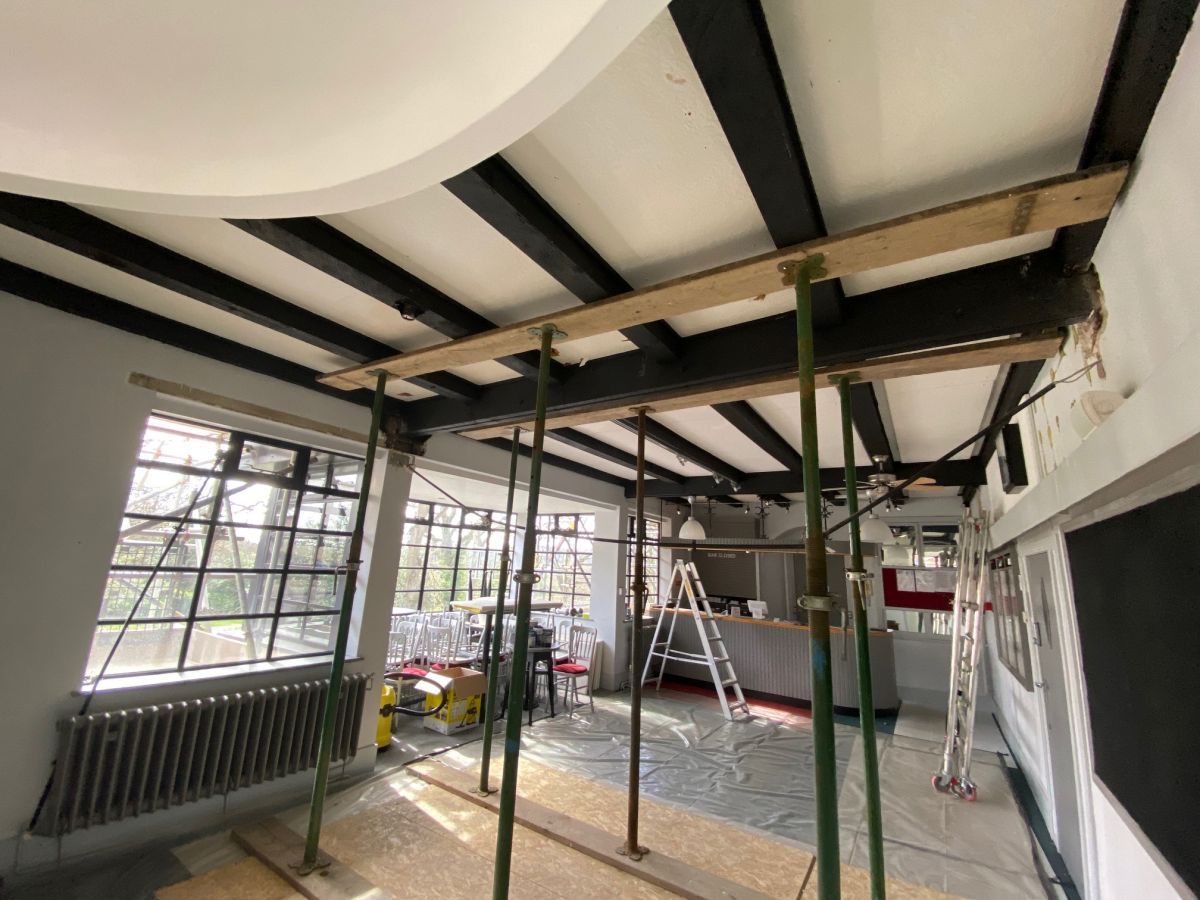 The erection of the scaffolding for the first stage of the project was completed. A weatherproof tent, covering half of the auditorium, has been constructed and, following a short delay due to cold weather and snow, the auditorium roof has been removed.

It has been determined that a section of the east facing auditorium wall (Avenue Road) will need to be strengthened to carry the extra load above. Stone pads for the new girders to sit on have been installed. The roof over the spiral staircase and one third of the bar adjacent to the spiral stair has been removed in preparation for further works. The foundation works have not progressed as planned following the discovery of an underground electric supply cable where some piles were intended to be. An alternative solution has been proposed and is awaiting approval from the structural engineer. This may delay the anticipated finish date by approximately two weeks. The foundation piling work on the other side of the auditorium is progressing as planned. 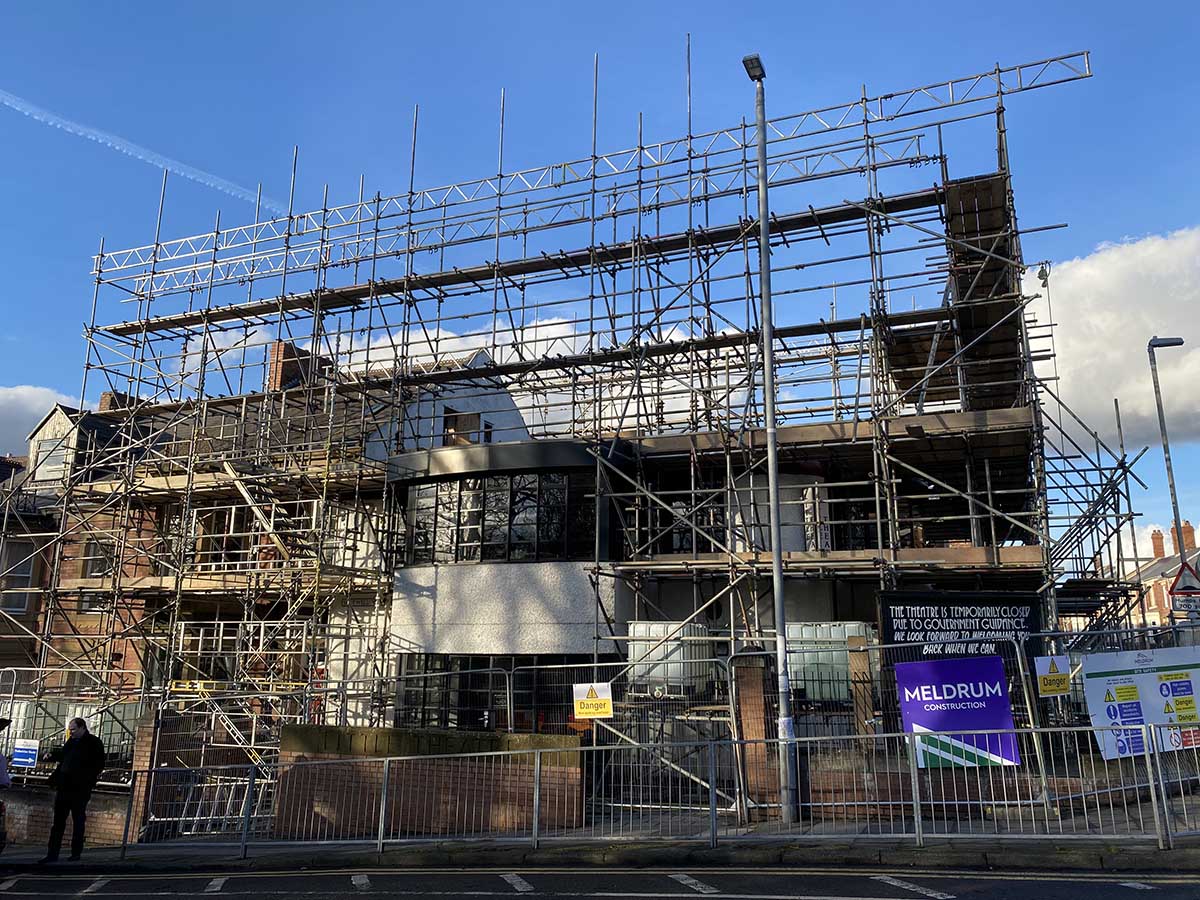 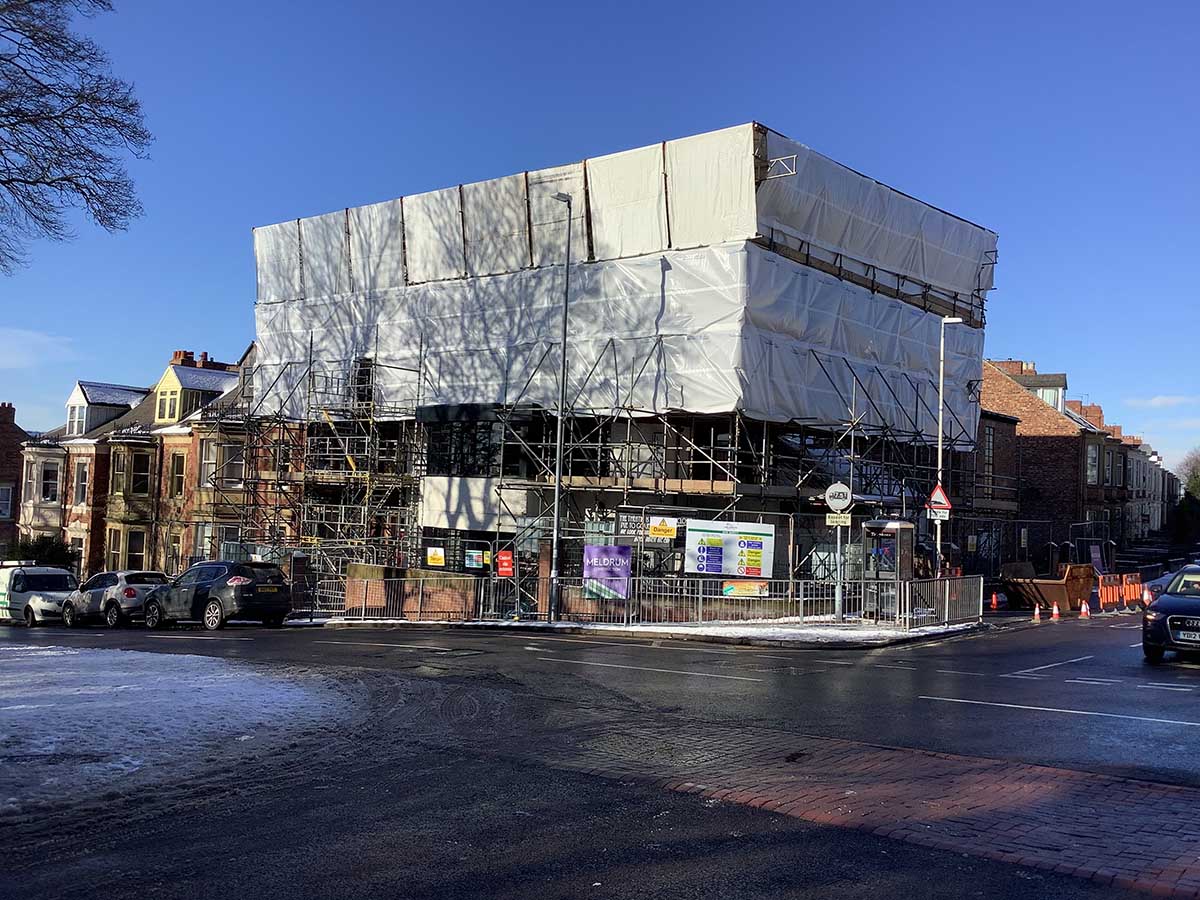 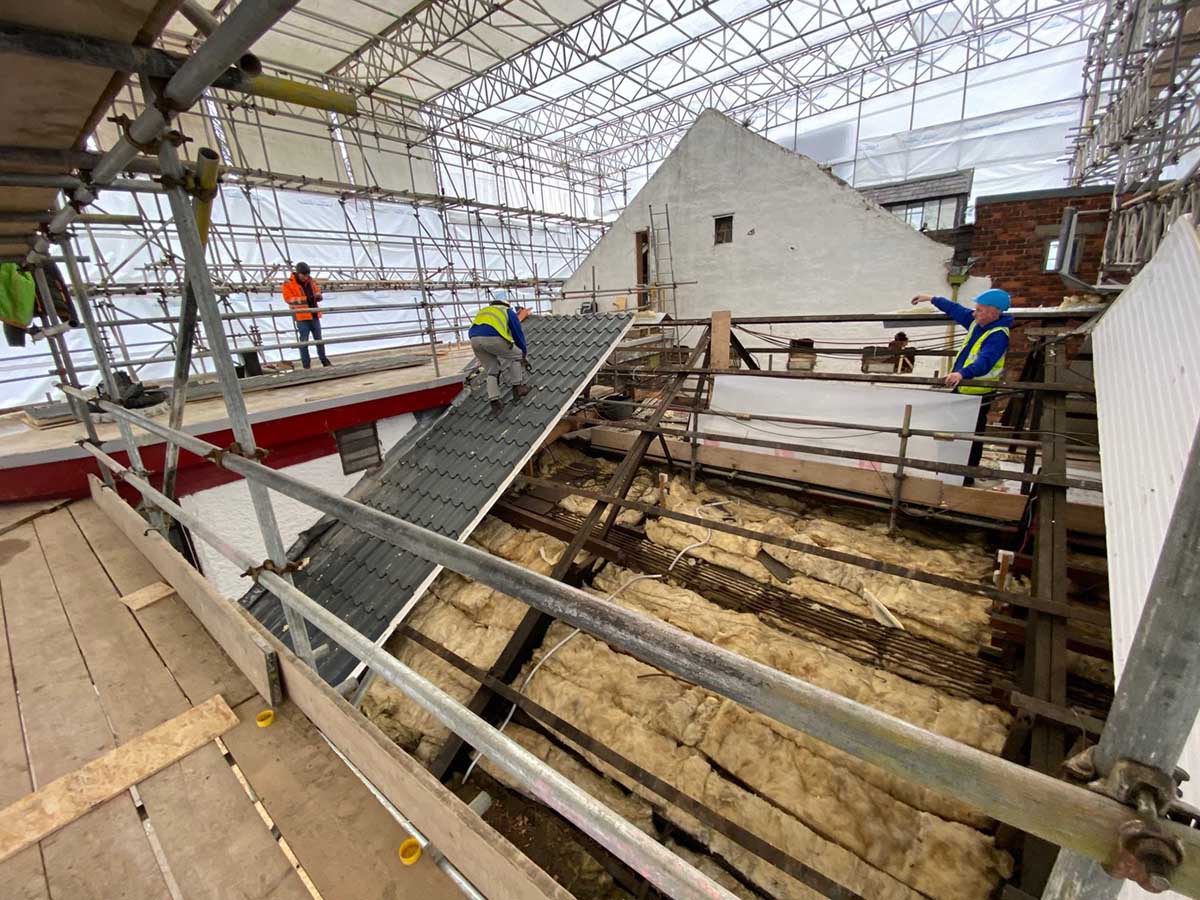 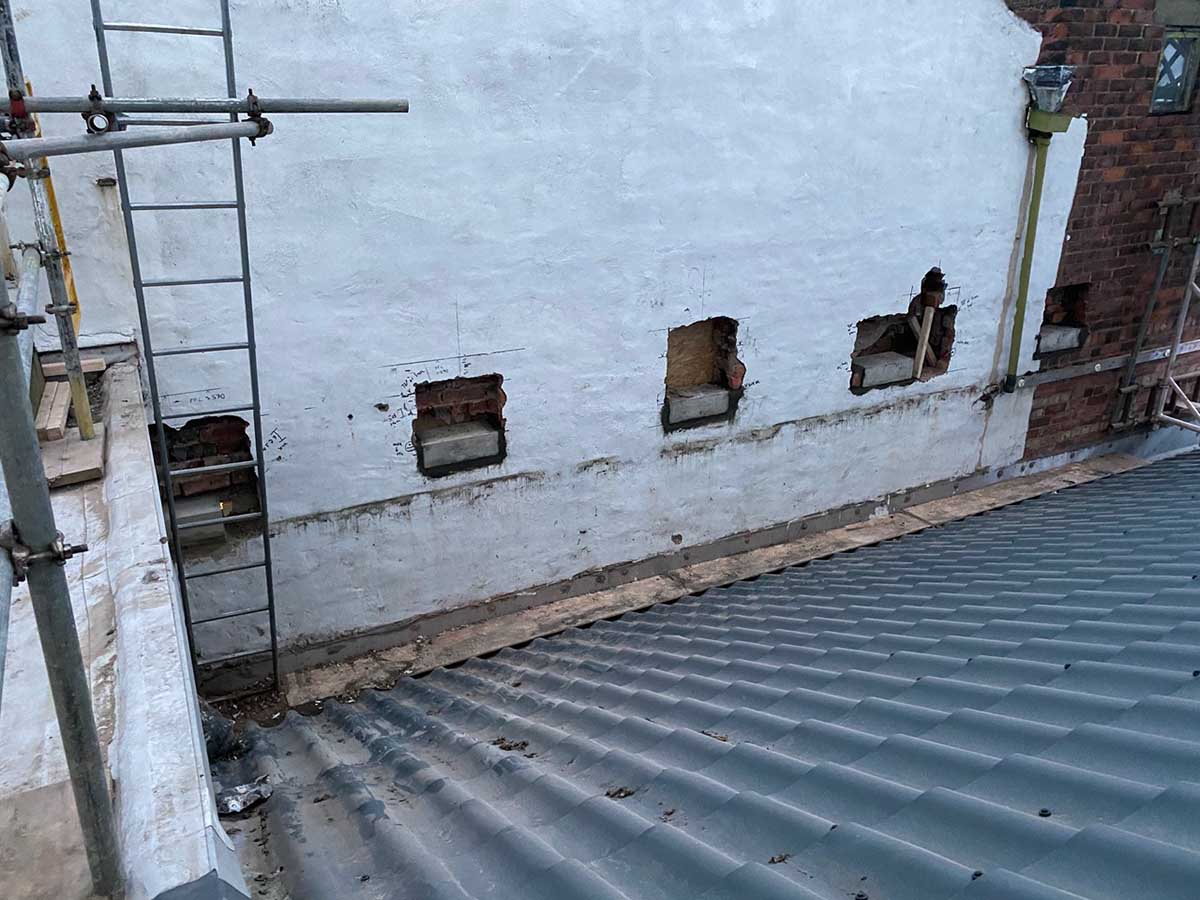 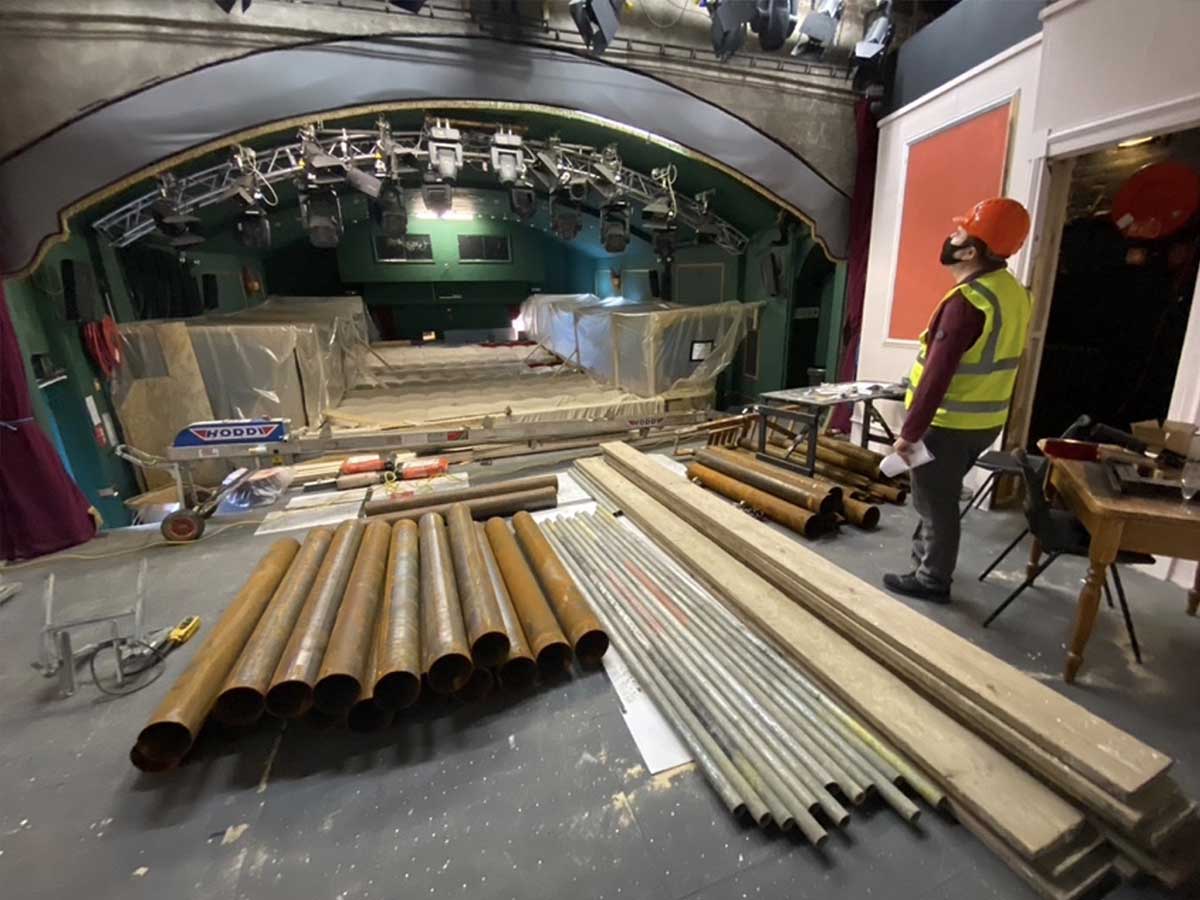 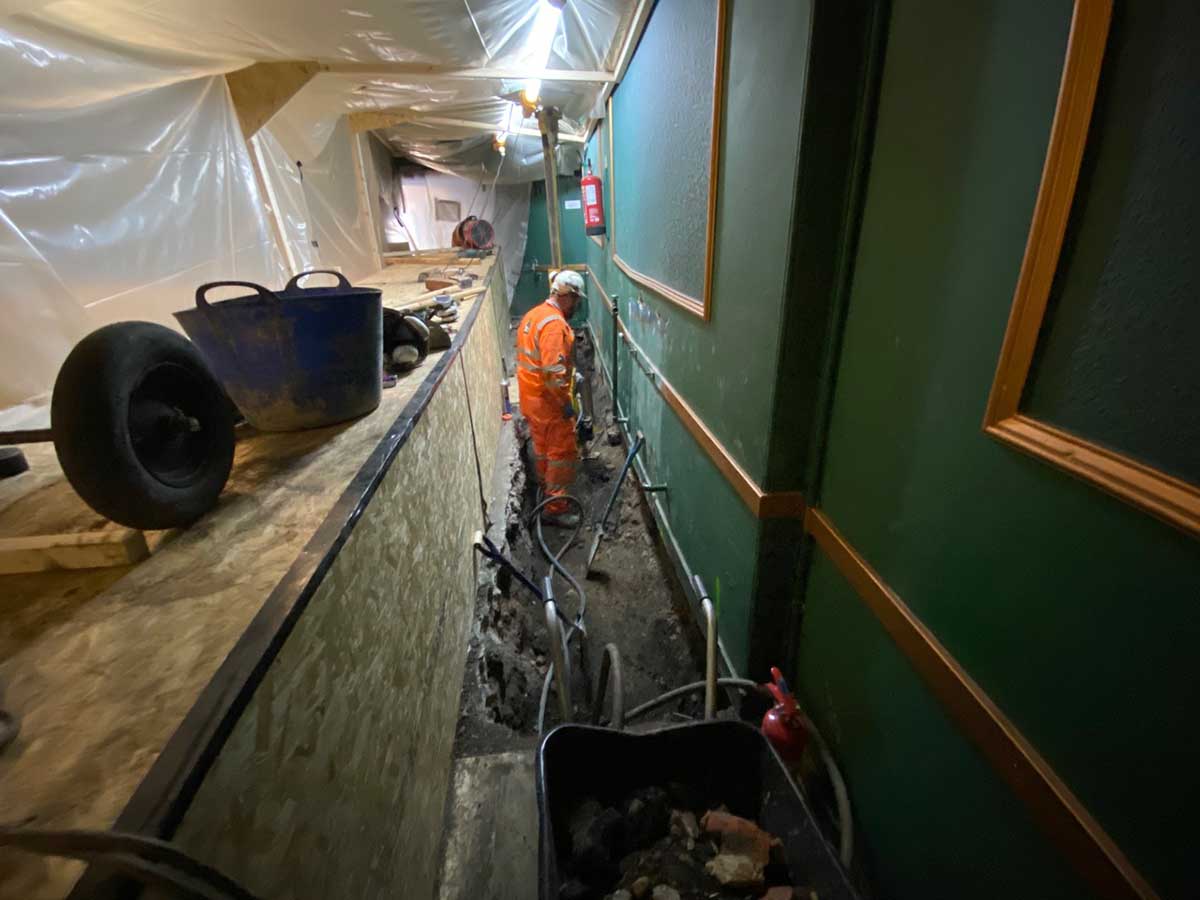 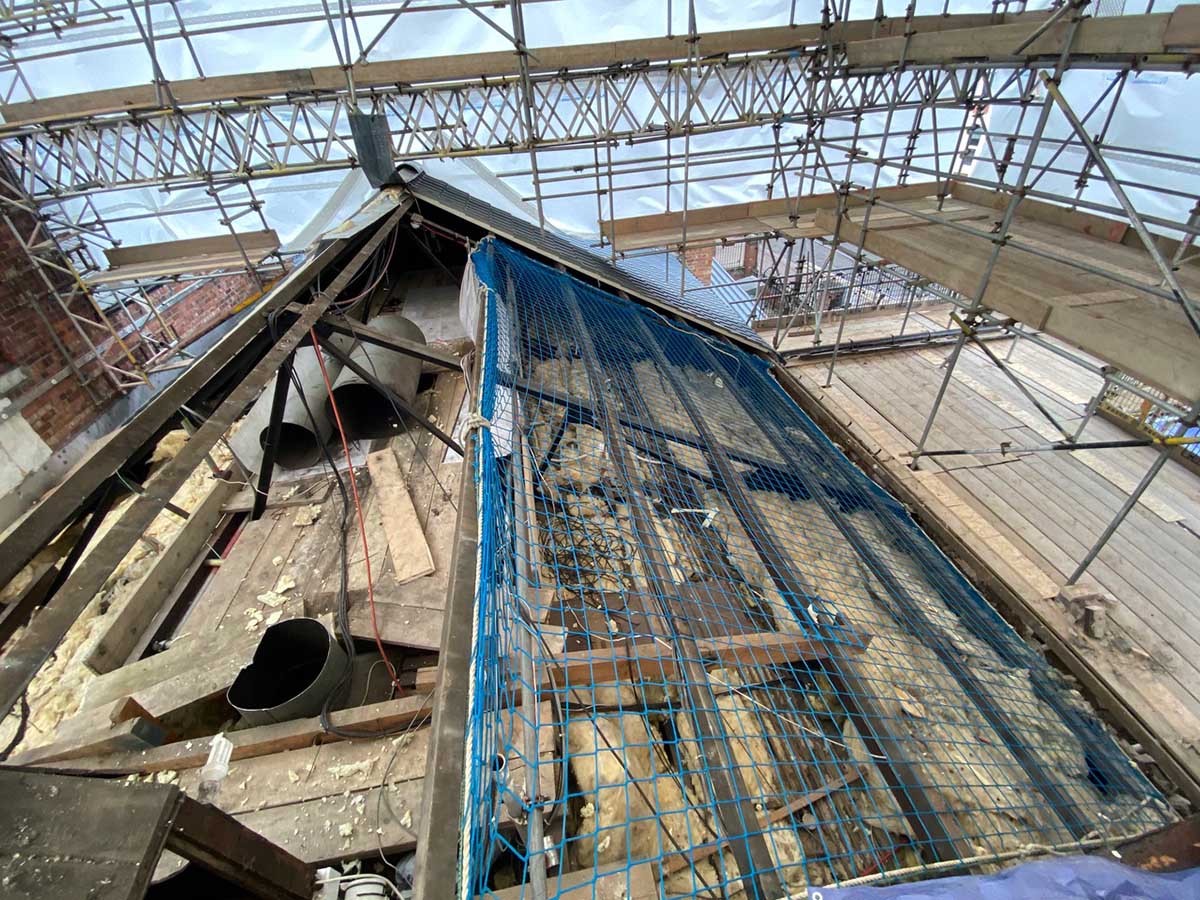 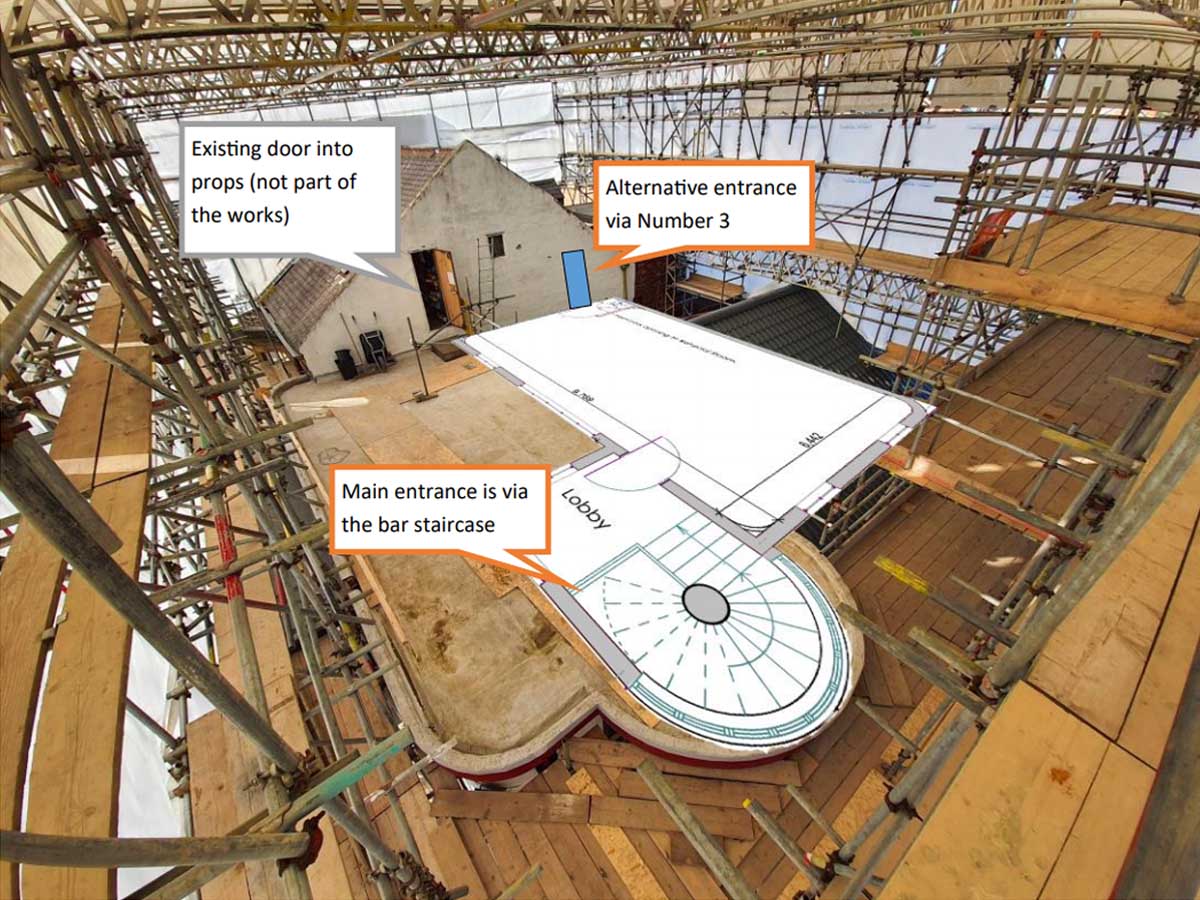 A construction office and crew welfare area have been created in the Number 4 café. All of the ground floor carpets have been covered with plastic sheeting. In conjunction with the structural engineer a piled underpinning system is being considered. Scaffolding work has started and will end up with a scaffold tent over half of the auditorium. The auditorium seating has been covered in a protective wooden structure to prevent damage during the works. 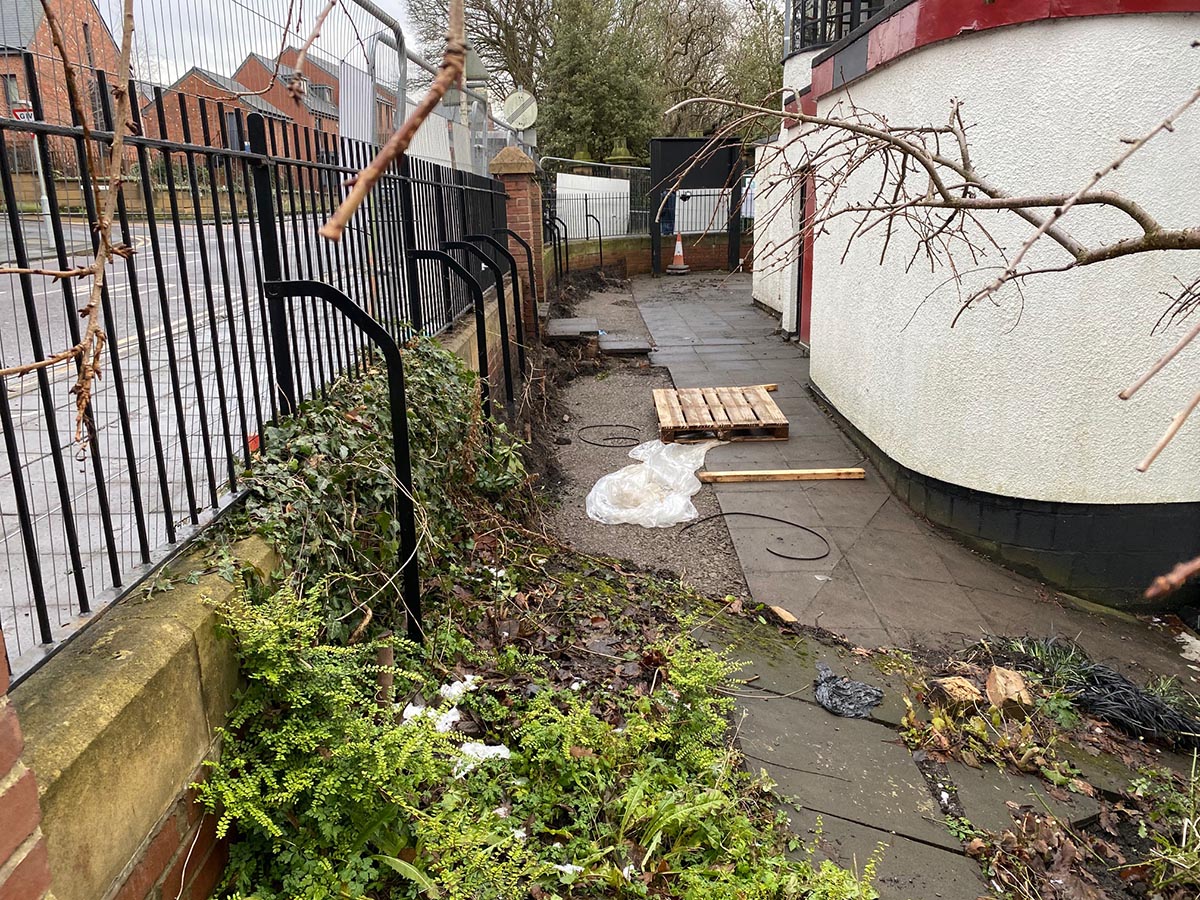 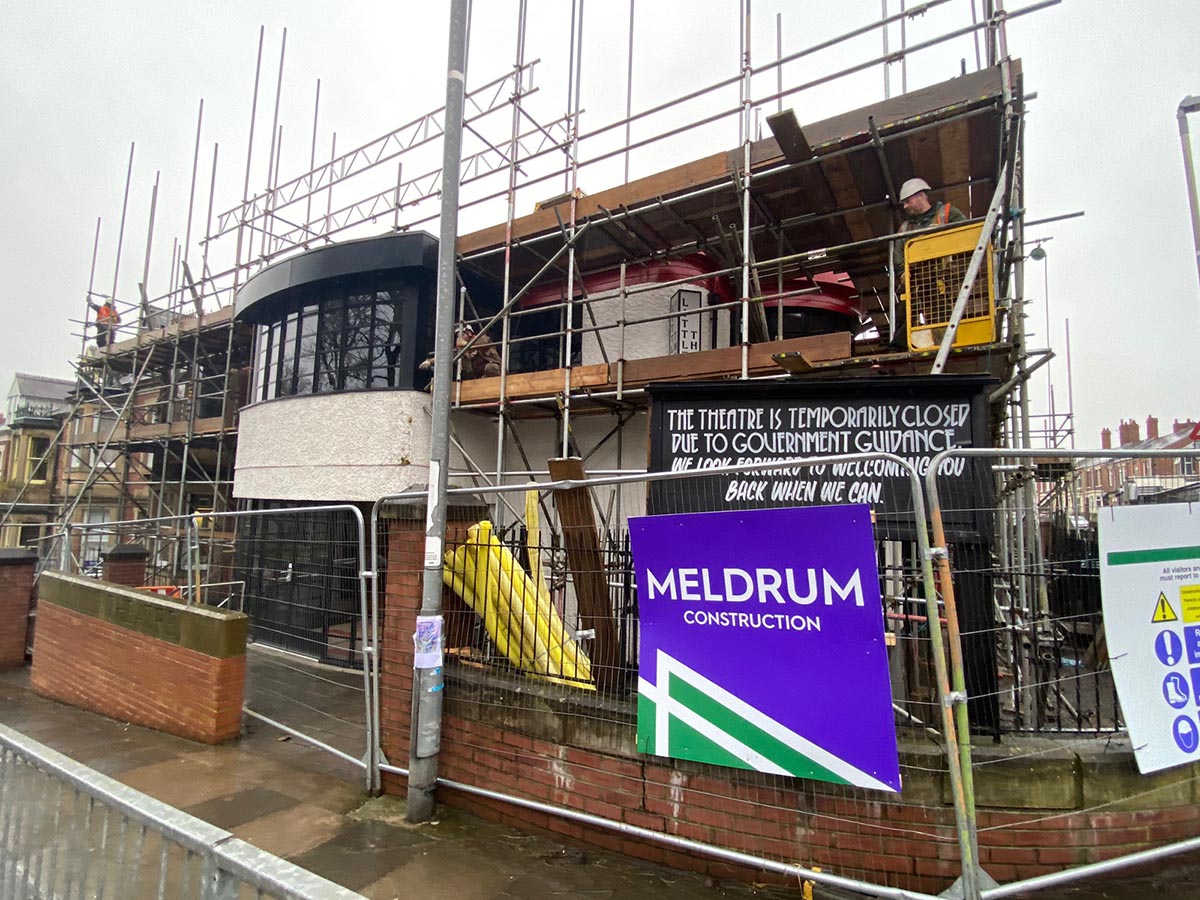 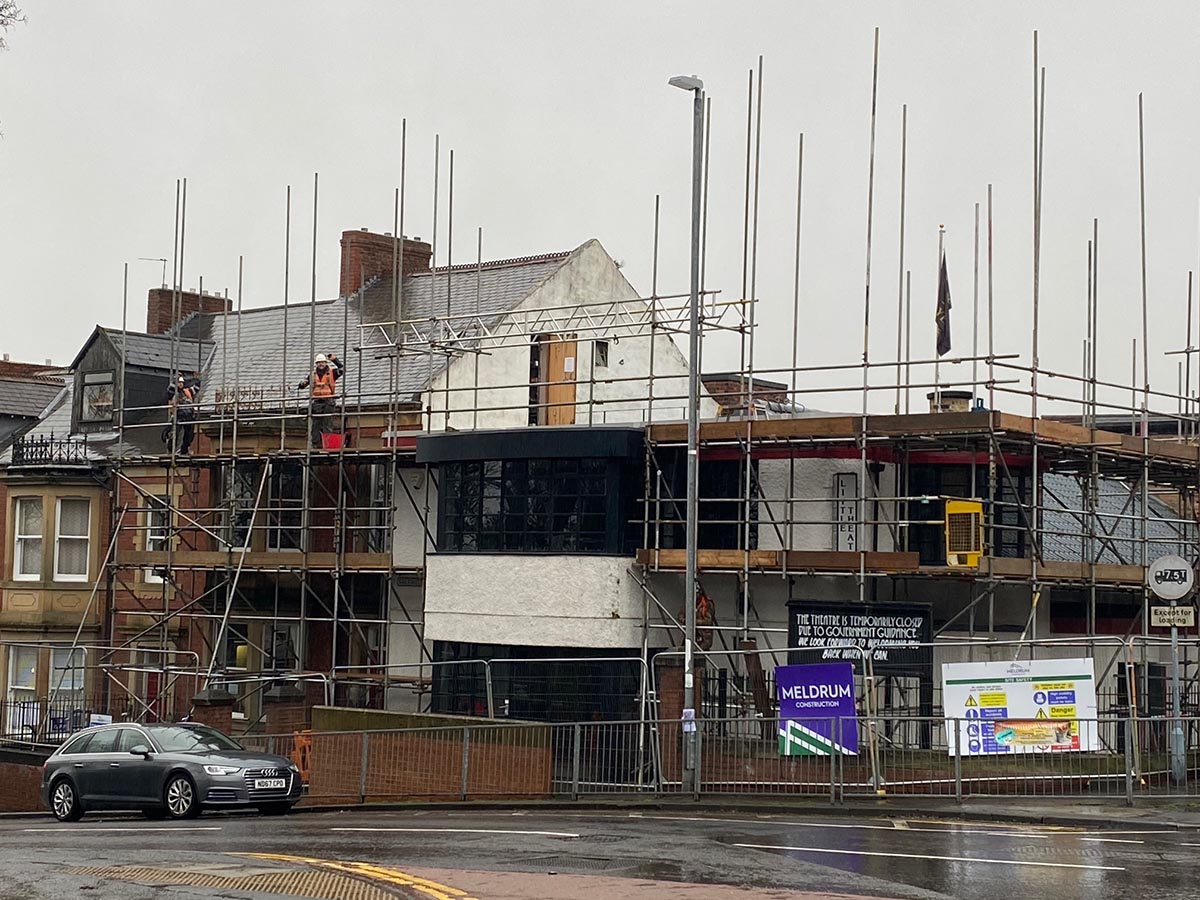 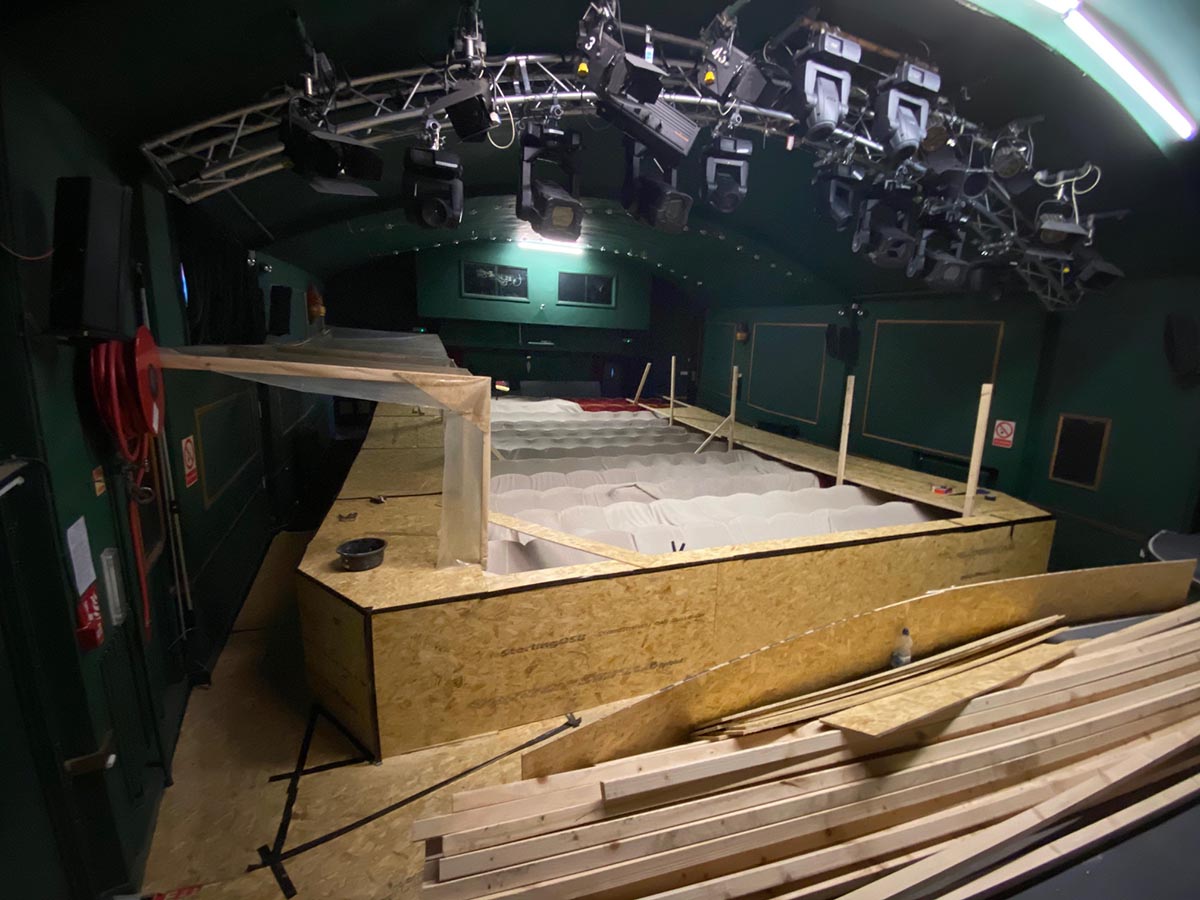 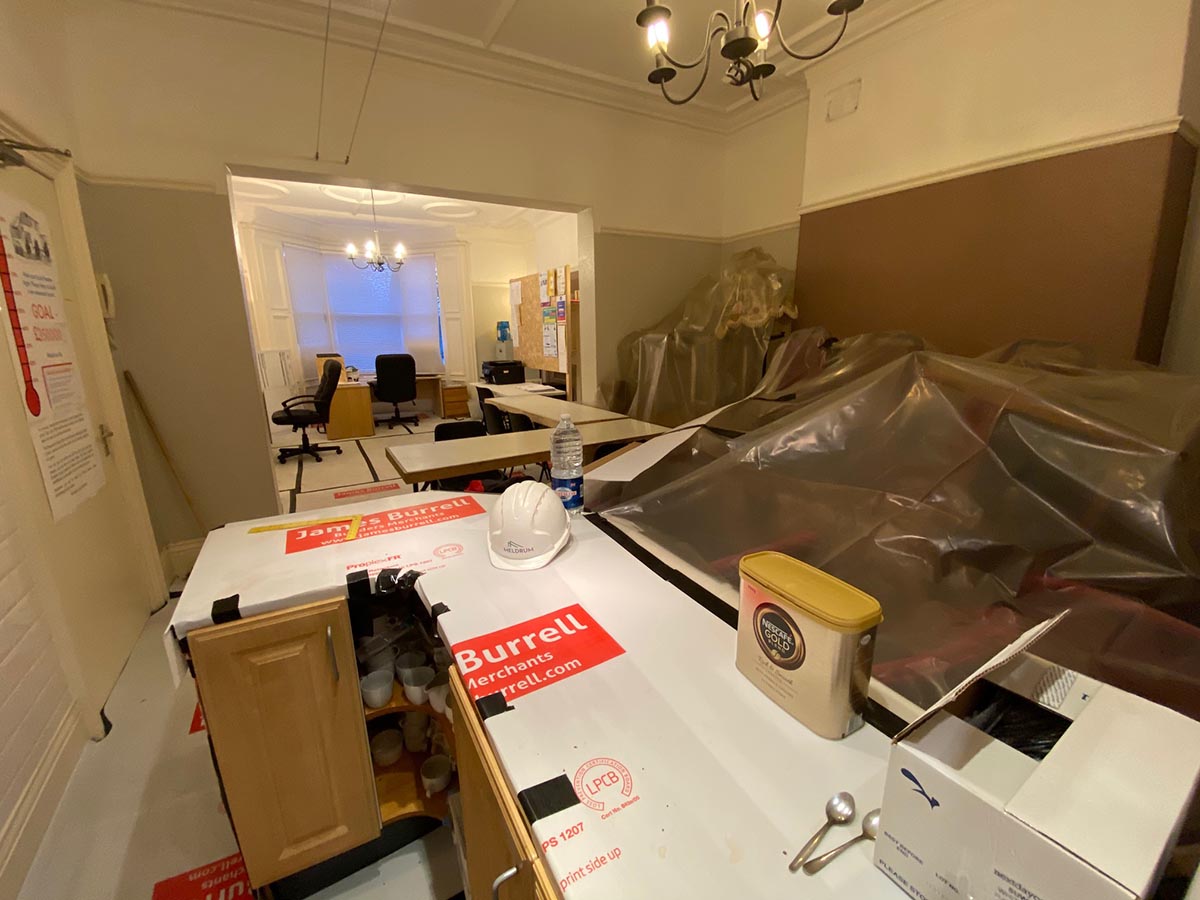 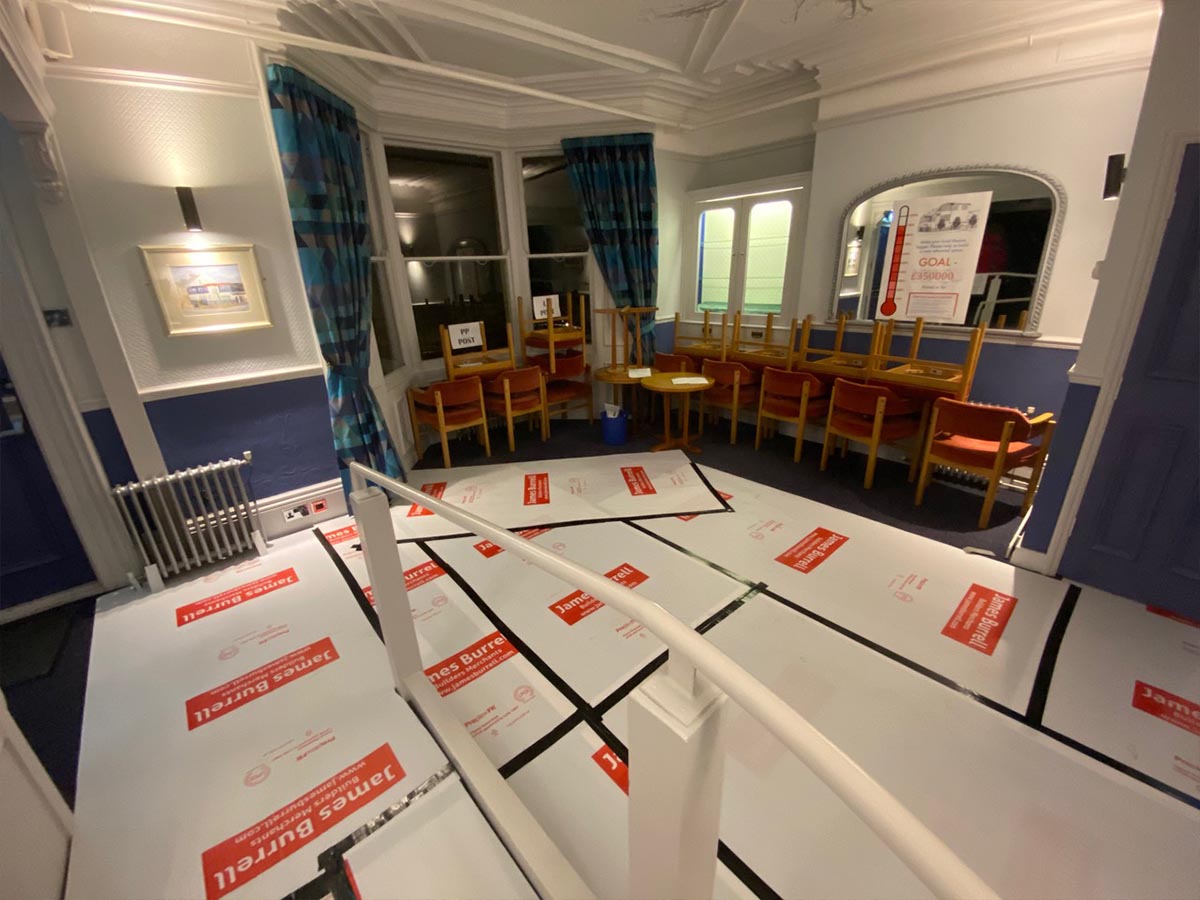 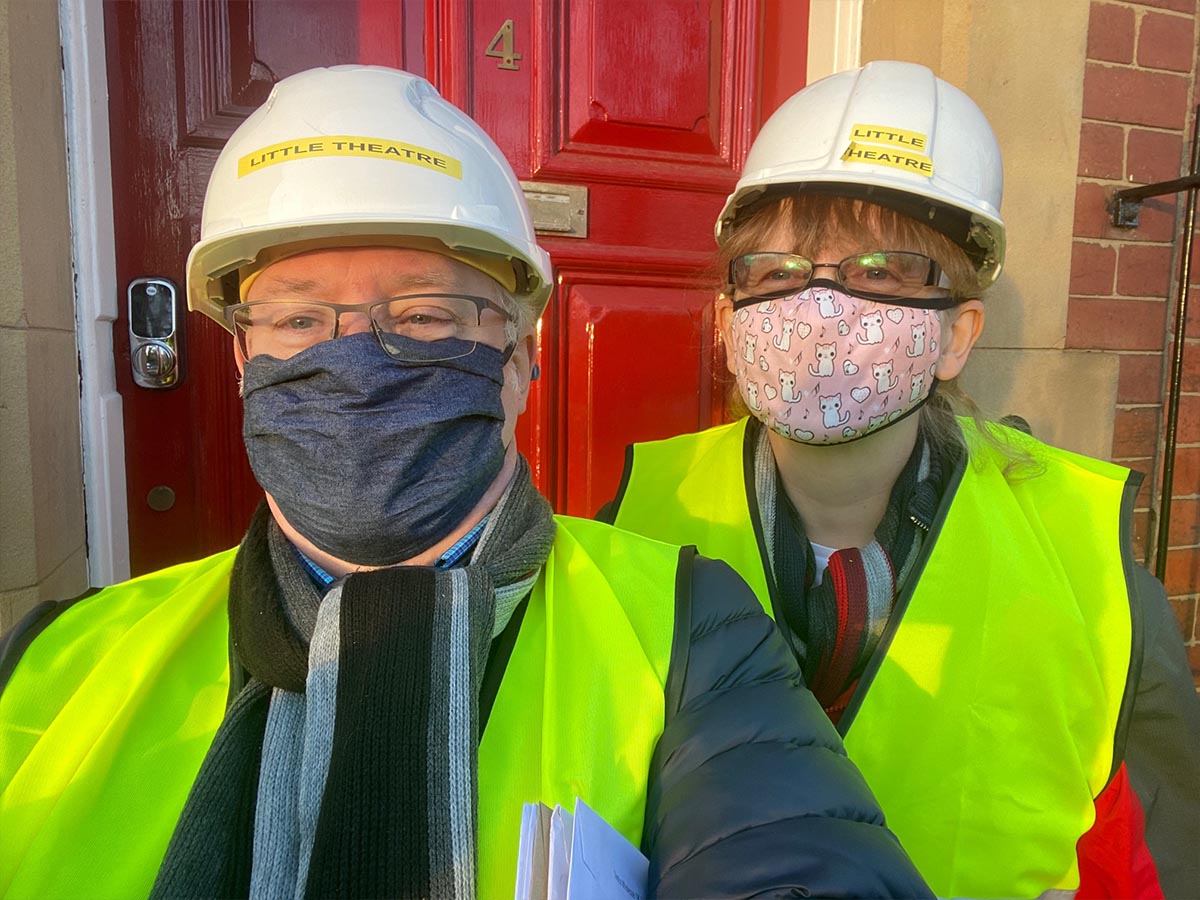 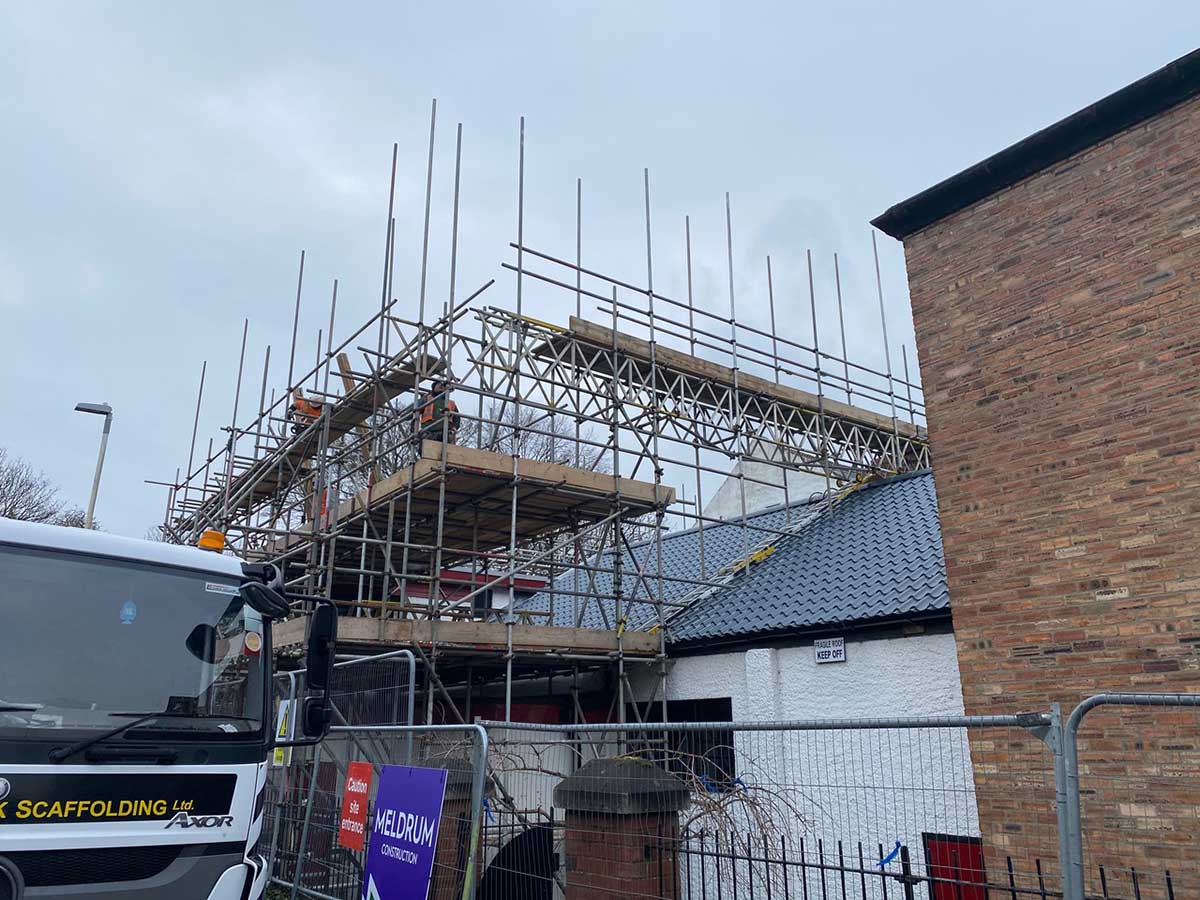